AboutSifuHawkinsCheung2019-04-19T12:50:17+00:00
By Hawkins Cheung, as told to Robert Chu, in Inside Kung-Fu November 1991Beginning in November 1991, Inside Kung-Fu published the following four-part interview with Hawkins Cheung. The articles detail his history growing up in Hong Kong with Bruce Lee, learning Wing Chun from Yip Man, and trace Bruce’s development of his own technique from Wing Chun principles.

Hawkins Cheung began his training in 1953 under the late grandmaster Yip Man. He attended high school with the legendary Bruce Lee and during evenings, the two would diligently practice wing chun together. To gain combat experience, they would engage in challenge matches; when they didn’t have opponents to fight, they fought each other. They were later separated when Bruce went to college in the U.S. and Hawkins attended college in Australia. Throughout the years, the two kept in touch through letters and phone calls. Bruce would detail his martial arts development through their conversations and correspondence using Cheung as a sounding board. Hawkins Cheung is one of the few individuals who experienced the progression that Lee went through in his martial art development from wing chun to Jun Fan to jeet kune do. The two were reunited in Hong Kong in 1970, when Lee returned home to make movies. The two shared and exchanged fighting experiences and training methods. They remained in close contact until Bruce’s death in 1973. Hawkins also is well schooled in other martial arts styles. He is particularly skilled in the Wu style of tai chi but he is familiar with the Yang, Chen and Sun styles as well. Master Cheung has also gained experience in Japanese karate-do and currently holds a fourth-degree black belt. In 1978, Cheung immigrated to the U.S. to promote wing chun. He is currently head instructor of the Hawkins Cheung Asian Martial Arts Academy in Los Angeles. He has appeared in several issues of Inside Kung-Fu magazine, given numerous public demonstrations, and appeared on television. He has always been low key about his relationship with Bruce Lee. Now that his friend has died, he finds that many of Bruce’s followers are distorting the real meaning of his jeet kune do. In this four-part series on Bruce Lee and jeet kune do, Cheung examines Bruce’s development, from his early days in Hong Kong to his final days as a film star, his creation of JKD, and the characteristics of the now-famous art.

Hong Kong in the l95Os was a depressed place. Post-World War II Hong Kong had suffered from unemployment, a poor economy, over-crowding, homelessness, and people taking advantage of each other. Gangs roamed the street, and juvenile delinquents ran rampant.

I met Bruce in intermediate school; he had been expelled from the famous European LaSalle Intermediate School to the Eurasian Francis Xavier Intermediate School which I attended. I used to make fun of him and call him “Bad Boy” because he was expelled. That was the beginning of our friendship. There was a real political situation in 195Os Hong Kong. The British led the colony and would sometimes treat the Chinese like dogs. Bruce wasn’t a big star then, he was just an ordinary guy. We started to learn wing chun to survive. When we weren’t fighting others, we fought each other. We would argue about our wing chun training, and would argue about our personal experience and knowledge. Everyone wanted to be top dog. We would purposely hold back information that we gathered. Everyone had to find his own source, and not let the others know what we learned. We would purposely hide a trick that we would get from Yip Man, the Seniors, or friends from other styles. We weren’t concerned about how good the gung-fu looked, just whether it worked. Everyone wanted to know how to get the job done. 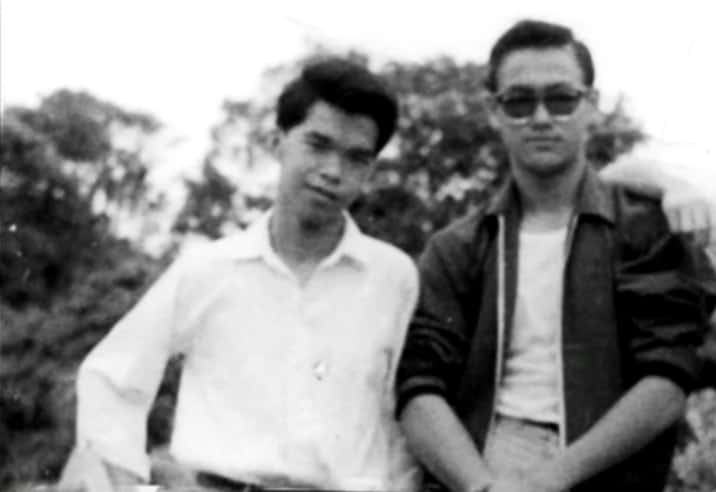 We were good buddies. We wouldn’t openly share our knowledge, but we tried to steal each other’s card. Whenever we learned a new method or technique, we would add it to our repertoire. Bruce would use a new trick on me, the next time I would throw it back to him first. We always asked ourselves where was the other’s source?

Against outsiders we were allies, but with no one to fight against, we fought each other. To test and see Bruce’s skill, I would purposely instigate or set up a fight. I would watch Bruce fight, and be a bystander to see how well he did. He would do the same. If he won, we would laugh; but if he lost, he would lose face and work harder to find a better means of beating an opponent. We would play tricks on our opponents to psyche them out, sometimes hiding our best techniques. What someone would throw to us, we’d throw the technique right back to him.

Our competitive spirit was not only in martial arts, but extended in daily life. Everyone knew that Bruce was good at dancing the cha-cha. At school, I knew some Filipino friends who were pretty good too, so I would pick up steps to show up Bruce. The next time I saw Bruce, he had a bunch of new steps! I questioned my friend to see if he had taught Bruce those new steps, but he denied any knowledge. I later found out that he went to my Filipino friend’s dance instructor to learn more steps! That was our character—to always look for a new source. I later went to the same dance instructor and tried to persuade him not to teach Bruce.

William Cheung and Wong Shun Leung were Bruce’s source of information on wing chun. They were our seniors, but we couldn’t openly let them know what level we were at for fear they wouldn’t show us more. If a senior got into a street fight, however, and lost, we could find out his standard. If we couldn’t figure out a problem, we would have to ask the old man (Yip Man) from different angles. When we matured, we began to share more openly.

I lived a couple of blocks from Bruce. Being from well-to-do families, we would sometimes have our driver pick up one another, if we wanted to hang out we would sometimes spend a weekend at each other’s home. When we had final exams, we would study together. We still kept up our old game. We would play tricks on an unsuspecting participant, one guy playing “good guy,” the other being the “bad guy.” One time, we persuaded two younger European classmates to fight each other. They were a grade younger than us and were good friends. Bruce and I separated them, and to find out who was the better instructor, we each picked one and trained him to beat each other up.

Bruce’s nickname at school was “Gorilla,” because he was muscular and walked around with his arms at his sides. Everyone feared him, but I was the only one who called him “Chicken legs.” He’d get really mad and chase me all over the school yard. Our friendship was very close.

Our school was the best in soccer, but Bruce and I never participated in any team sports. One day, there was an announcement that there was an inter-school boxing championship. The all English Saint George Intermediate school held the championship. Our school didn’t have a boxing team. Someone in our school suggested that we get a boxing team together. We had a reputation in the school as being the naughtiest, so someone suggested that Bruce and I get involved.

The night of the match, I went into the champ’s dressing room. He was my friend’s brother. Bruce was supposed to face him. I spoke to the champ and warned him that he was facing the Gorilla now, who was an expert in gung-fu, not boxing, so he’d better watch out!

The champ was intimidated, because he heard that Bruce and I practiced gung-fu together. Bruce, on the other hand, was concerned that we never boxed before. At the beginning of the fight, Bruce attacked his opponent from the inside with a tan da and cut to his opponent’s center. The champ was psychologically unbalanced, while Bruce continued to use tan da with a follow-up of straight punches to the champ’s face, and blew him out. Bruce won the championship!

The next match was myself and another for the lightweight championship. I was disqualified for using pak da, which the judges considered against the rules. In 1958, we graduated from high school. Bruce said that he was going to the U.S. upon his father’s request. Bruce didn’t want to go, but his father forced him. Bruce feared his father and had to comply. I was deciding to attend college in Australia. I asked Bruce what he wanted to study. Bruce replied he was going to be a dentist. I cracked up and laughed in his face! “You, a dentist?” I said, ‘Your patients would lose all their teeth.”

Bruce said that his father would support him and pay for his expenses in the U.S., but he wanted to be independent. To make money on the side, he said he would teach wing chun. I replied that he didn’t have much to teach at that time; we had both only learned up to the second wing chun form, chum kiu, and 40 movements on the dummy. We had a friend whom we called “Uncle Shiu” (Shiu Hon Sang), who taught northern styles of gung-fu. Bruce thought it would be a good idea to learn some of the more pretty, showy styles before he left. Bruce learned northern style for showmanship. In the late 195Os, Bruce had already planned to hide his art. Many were looking for the showmanship, not the killer. Bruce would give them what they wanted. 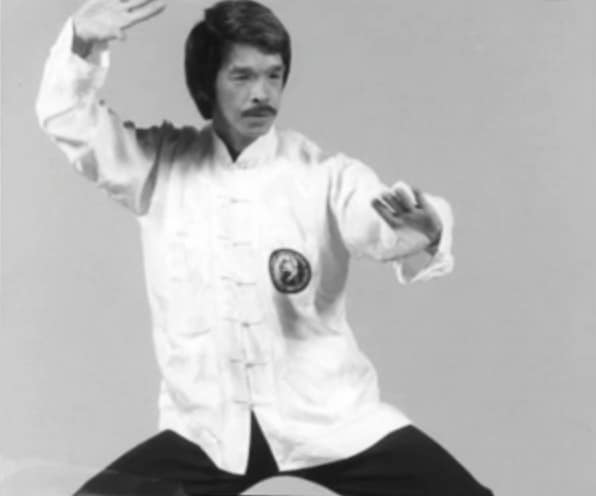 We went to Uncle Shin’s gung-fu club at seven every morning. We began to learn lam ad (a basic northern style gung-fu set). I hated master Shin’s dog, and his dog hated me equally, as he would bark at me every time I visited. Finally, the early mornings and the loud dog made me drop out. Bruce continued for two months more and learned gung lik kuen (training power fist set), bung bo kuen (a basic praying mantis set), and jeet kuen (quick fist), all northern style sets.

Prior to any Hong Kong resident leaving for a new country, you had to check with the police station to make sure your record was clean. Bruce applied for this certificate, and found that our names were on a blacklist of known juvenile delinquents. He called me at home. “Hawkins, big trouble,” Bruce exclaimed. “Our names are on a known gangster list. I’m going down to the police station to clear my name, and while I’m there, I’ll clear yours, too.”, I thanked him.

A few days later, a police investigator came to my house and questioned me about gang relations. Bruce’s efforts to clear me actually got me more in trouble. My father had to pay off this investigator to have my name wiped from the record, or else I wouldn’t have been able to attend college in Australia. I hated Bruce for that!

The day he left, I escorted him to the dock. After many years of being as close as twins, we would be apart for the first time. It would be many years before our paths would again cross.